On Amnesty and that open letter

As most readers of this blog will probably be aware, Amnesty International recently proposed adopting a policy in favour of sex work decriminalisation. The Coalition Against Trafficking in Women – a radical feminist organisation for whom “trafficking” means, simply, prostitution – had kittens, and got a whole bunch of celebrity women (and others) to sign an open letter calling on Amnesty to reject this proposal. You can read the proposal here and the CATW letter here. (There’s also a counter-letter from the International Committee on the Rights of Sex Workers in Europe, an actual sex worker-led organisation, which you can read and sign here. And please do.)

Much has already been written about the CATW letter, so I’ll limit my own critique to two points:

1. Any anti-sex work argument that cites Germany and/or the Netherlands without even mentioning New Zealand is either ill-informed or simply dishonest. The celebrities may fall into the former category, but CATW and many of the ordinary signatories know full well that New Zealand, and not those other countries, is the preferred model of “the HIV/AIDS sector, including UNAIDS” – which CATW’s own letter describes as the main inspiration for Amnesty’s proposal. Their failure to mention it can only be deliberate, presumably in an effort to prevent the ill-informed – the people who do think Germany and the Netherlands are what decriminalisation means in practice – from learning of the existence of the New Zealand model, and deciding to find out more about it.

2. It is equally dishonest to portray the policy proposal as one that “sides with buyers of sex, pimps and other exploiters rather than with the exploited”. This is what the draft policy actually says:

It is patently clear from this paragraph – the only one in the draft policy addressing client and third party criminalisation – that it is precisely “the exploited” (by which CATW mean all sex workers) whose rights Amnesty is aiming to protect. CATW are free to disagree that decriminalisation would protect them, of course, but an honest response to this paragraph would require at least acknowledging that as Amnesty’s aim.

On top of that, the policy has an appendix – the summary of research findings Amnesty undertook with sex workers in four different countries (Argentina, China, Norway and Papua New Guinea). This runs to four pages, and includes a number of direct quotations from the sex workers Amnesty spoke to. I’ve read and reread and reread the four pages, and I can’t find any direct quotes by clients or third parties.

Here’s a sample of the quotes from Norway: 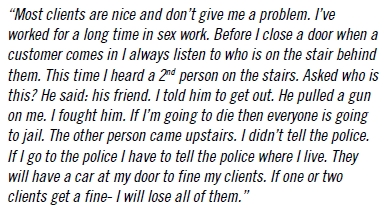 One would almost have to wonder what CATW think it means to “side with” a person, if not to support abolishing a law that that person says puts them in danger.

Now it could be argued that we don’t know how many sex workers told Amnesty that actually they think criminalising their clients is in their interests. This is true; we don’t. But the fact is that every research study I have ever seen from anywhere on the impacts of client criminalisation has found that sex workers consider it to put them more at risk. Every last one. Even the official reports used by the Swedish and Norwegian governments to justify their laws. Even the City of Oslo report used by statistically illiterate radfems to justify the laws. So to make that argument would be disingenuous. But to not even acknowledge the existence of the research findings, while simultaneously claiming that Amnesty is siding against sex workers? That’s worse than disingenuous. It’s bad faith.

And if you are a journalist who reported on the CATW letter without reading and referring to what the Amnesty document actually says? Shame on you.

Identity Ireland? Xenophobia is NOT my Irish identity.

Twenty-five years ago the phone rang. I’m a little hazy on the details- you have to remember, I was only seven at the time. I remember that I’d been excited, because my dad was going to see my uncle John living in America, and that uncle always sent me on the best presents. Toys you’d never get here- polar explorer play sets, a gorgeous illustrated hardback Hobbit that I wouldn’t appreciate till years afterward.

There was always a kind of glamour to our overseas family, wasn’t there? You’d only see them once or twice a year at most. Their visits were filled with drama- the excitement of meeting them at the airport or in a house stuffed with family, a few days or a week to fit in months worth of experiences, and before you knew it you were saying goodbye again.

I say ‘were’, of course, but the present tense would be just as appropriate, wouldn’t it?

Of course- this won’t surprise you, since I led with it- that phone call twenty-five years ago was different. The details I’m gonna keep to myself, but my uncle- less than a decade older than I am today- had died suddenly.

It happens. It was horrible, of course. Of all my childhood memories- almost all hazy- the feeling of walking into my Nana’s house later that day, the silence of the aunts, uncles and cousins filling the living room lives in sharp, full-colour contrast.

I don’t know the details. I was only a child. But I think that it took days to bring his body home.

Let’s fast forward a few years, shall we?

To the Tea Cosy. Y’know the drill, the rest is over there

Yesterday in the Irish Times, Dr Rhona Mahony, Master of the National Maternity Hospital, had something to say about folic acid. Up till now, you see, women people planning to become pregnant have been advised to take folic acid supplements daily. Ireland has a high rate of neural tube defects– which cause everything from spina bifida to anencephaly- the majority of which can be prevented with folic acid.

As of yesterday, this advice has changed:

“Up to 50 per cent of all pregnancies are unplanned, but a baby’s crucial neural tube develops in the first few weeks of pregnancy when many women may be unaware they are pregnant,” Dr Mahony said. …“Women who are sexually active should start taking the vitamin daily even if a baby is the last thing on their mind”

Taken at face value, this seems like good advice. If you’re at risk of getting pregnant, then taking a simple step to prevent painful or fatal birth defects seems sensible. And from a purely medical standpoint, I can see her point. Unplanned pregnancies happen! If I were at risk of getting pregnant and thought there was a reasonable chance I’d keep any pregnancy that resulted, I would seriously consider adding some folic acid to my daily routine. And I’m sure that, as a medical practitioner, Dr Mahony sees more of the suffering that neural tube defects can cause than most.

However, this doesn’t mean that Dr Mahony’s perspective- while important- is complete, or that she fully understands the context in which she speaks. Because medical advice is never given in a vacuum, and in this context Dr Mahony’s well-intentioned advice is ill thought-out, ignorant of context and in certain cases may be actively harmful.

Let me explain. Let’s go to the beginning.

Check out the rest, over at the original post in the Tea Cosy.

What TORL aren’t telling you about those “trafficking” stats

Earlier this week, the Central Statistics Office published its latest reported crime data, which included a figure of 33 “human trafficking offences” – up from 22 in the last report.

Predictably, this was seized on by the Turn Off the Red Light campaign to bolster its call for the criminalisation of sex workers’ clients:

Now as I’ve noted a number of times, Irish “trafficking offences” can encompass quite a number of things that have nothing to do with sex work – including unlawful sexual activity with a minor and helping a person enter the State to seek asylum. So, quite apart from the obvious point that we don’t know whether the increase relates to sex trafficking or labour trafficking, we don’t even know if it relates to trafficking in the Palermo Protocol sense at all.

So, I decided to do something I’m pretty sure never occurred to TORL to do: I emailed the CSO’s crime data section to ask for further detail on these offences. Within a few hours, I had a reply inviting me to telephone them to discuss my query (see how easy that was, TORL?).

Unfortunately, the very helpful person who answered the phone was unable to provide any detail, because the CSO don’t have it: the figures were reported exactly as they came to them from the Gardaí. I asked if they could even be broken down into which statutory offence was reportedly committed, but the answer was no: literally all the CSO were told was “33 human trafficking offences”.

Furthermore, the CSO told me, this doesn’t necessarily even represent things that are legally defined as human trafficking: “It’s a Garda definition, not a legal definition.” So anything the reporting Garda considers trafficking would go into that figure. The lack of any kind of standard renders the statistic wholly unreliable evidence of anything at all.

What is apparent then is that the “33 human trafficking offences” need not relate to 33 separate incidents of (whatever kind of) human trafficking, i.e., 33 victims. And since the same was true of the previous report’s 22, we can’t judge the significance of the 50% increase in any meaningful sense. It’s a number on a page that tells us nothing about anything – except, of course, the willingness of crusaders to manipulate data for their own ends.