Sex trafficking in Sweden, according to the Swedish police: part 3

This is the third in a series (previous parts here and here) of my analyses of Swedish police reports which, as you’ll see, depict the law against paying for sex in a less flattering light than you’d expect from all the propaganda about it. I’m not going to go into much depth with this one, first because it largely repeats the findings of the previous two and second because I felt sick to my stomach before I reached the end of it, for reasons that will become clear. What follows, then, is only a few particularly notable excerpts from the latest report (published in November 2015). The link is here and, like last year, I’ve had to run this through Google translate; it seems the practice of publishing these reports in both Swedish and English ceased after my first post in this series. I’m sure that’s just a coincidence.

In cases where the women used in prostitution in Sweden had been found the police or NGOs offered opportunities for support and assistance. If they are not willing or able to cooperate with law enforcement authorities in an investigation into human trafficking or pimping, they could in some cases be rejected under the Aliens Act to the EU country where they have a residence permit. That women do not want or dare to cooperate in an investigation may be due to lack of confidence in the police, but also to the fear that they or their family will be punished. (p.16)

Supporters of the law often deny that this happens, but there it is in black and white from the Swedish police themselves. Non-EEA sex workers or women trafficked into prostitution (the report assumes they’re the latter) risk expulsion if they don’t help the police with their investigations – even though the police know that sometimes they refuse out of fear. What kind of “support and assistance” is that?

By the way, here’s the footnote to that paragraph:

According to Chapter 8, Section 2, first paragraph “an alien may be rejected if it can be assumed that during his or her stay in Sweden he or she will not earn a living in an honest way”.

Remember, these are women the law purportedly regards as “victims”.

Note also the procedural defect, which allows a person to be deported based on an assumption. In a country where discrimination against “Asian-looking” women is permitted as an anti-prostitution measure, without any actual evidence against the specific woman, you’d be forgiven for not putting much confidence in those “assumptions”.

In 2014, the police noted a change regarding the number of Internet sites with ads for the sale of sexual services where there was reason to suspect that the victims were under 18 years old. The ads were fewer and the police saw a change in the way to make contact from ads to the open pages of chat and social media applications such as Facebook.

It’s been pointed out time and time again that even where the sex industry is criminalised, it constantly adapts to new technologies and new methods of avoiding detection. Here’s a good example. Advertising on social media undoubtedly predates 2014, even if the cops weren’t aware of it. If police scrutiny begins to make that too inconvenient, something else will replace it – that’s an absolute certainty.

Oh and incidentally, if you’re imagining that it will only be people actually advertising sex whose social media accounts will be scrutinised, remember that the Swedish police have fairly strong surveillance powers. Anyone who spends time in, or talks to people in, Sweden can be pretty sure they’ll use this to justify even more snooping into your private communications.

Sex is still being sold by online advertisement, though, and on page 29 they give an example of it:

In the spring of 2014 the Stockholm police prostitution team came in contact with a 14-year-old girl sexually exploited by adult men for payment when she advertised sexual services via the Internet. The girl said that she was bought and sexually exploited by several men and the police managed to identify two of them.

The 14-year-old girl is, of course, an iconic figure in anti-prostitution campaigning. This image was all over the place in Ireland a few years ago: 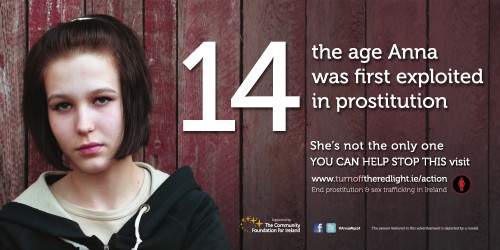 The organisations behind this ad want us to believe that Anna’s sad story wouldn’t have happened if only there was a law here criminalising men who pay for sex. Yet here are the Swedish police confirming that 15 years after this law was introduced – a law older than she is – they have their own Anna, who’s been paid for sex by “several” adult men. And I’m guessing “she’s not the only one”, either.

On page 43, we find what may be the single most heinous thing I’ve ever read about this law. Discussing penalties (and why the doubling of them doesn’t seem to have worked as well as expected, although of course that’s not stated in so many words) the report says:

several proposals have been made that the crime of purchase of sexual services should be divided into severity and a felony introduced. The [2010 official] evaluation of the effects of the ban on the purchase of sex noted in its analysis of this question that a classification of the offence by several severity levels could bring more disadvantages for the fight against this and related offences. Police Regions agree with the commission’s fear that graduation would lead to resources being exclusively devoted to crimes considered more reprehensible and that the investigation of the crime of purchase of sexual services would therefore not be prioritised.

Read that again, and let it sink in. Actually, let me repeat this bit:

Once more. Just in case.

I am nearly at a loss for words about this. One of the arguments that has been made against the introduction of this law in Ireland is that it would divert resources away from serious offences (like actual trafficking and exploitation) because the police would need to use those resources going after just any man who pays for sex. So, here the Swedish police are confirming that that’s exactly what they want it to do. As with the increase in stigma against sex workers, the reduced ability of the police to focus on “more reprehensible” crimes against them is a feature, not a bug of the law.

There are case study summaries at the end of the report, but I think I’ll leave it here. If there is anything more outrageous or despicable than the deliberate refusal to prioritise serious crimes against sex workers, I’m not sure I have the stomach to read them.

Now if you’ll excuse me, I’m off to donate to National Ugly Mugs. Please consider doing the same if you can.

Posted in Sex work and tagged Sweden. Bookmark the permalink.

Taking the Boat: A Short Film by Lisa Keogh

I don’t find it difficult making decisions, which is probably a good thing considering that a lot of writing and directing is about making decisions. How long should we linger on close-up? Is there really another world or is it all in her head? How the hell are we going to shoot this if it keeps raining?

Most of the time when we claim to agonise over a decision what we’re looking for is the permission to make the choice we feel is instinctively right.

For me, there is no drama in the decision of whether or not to abort an unplanned pregnancy, because drama suggests conflict between right and wrong. Instead, when it comes to abortion, each woman makes the choice that is best for her life – she just needs to give herself the permission to accept it. And society needs to support her to make that choice. Every child, whether planned or unplanned, should be a wanted child.

Too many women are imprisoned by the cloak of shame around abortion. The dramatic arts have played their part in adding to that cloak and in attempting to lift it. It all comes down to how writers handle the issue. Making films about “the dilemma” implies there are only certain circumstances where abortion is acceptable. It makes people believe they have the right to examine a woman’s choice about her own body and to make her justify why she does or doesn’t want to proceed with a pregnancy.

Instead, I believe we need to trust women. Instead of focusing on the dilemma of whether or not to have an abortion, exploiting the suspense of a “will she/won’t she” plot, what needs to be examined is that Ireland is exporting its abortions. 12 women a day are leaving our island to access services that should be free, safe, and legal on their doorsteps. How many other women are ordering pills over the Internet and facing prosecution? How many others are forced to continue with a pregnancy because they don’t have the means, knowledge, or support to make that trip?

25,000 women have left Ireland in the last five years to access abortions. That’s a lot of stories about taking the boat – about finding the cash, arranging childcare or time off work, booking flights or ferries, about lies told and secrets kept.

Taking the Boat is the story of just two of those women.

Posted in Abortion. Bookmark the permalink.