So you don’t want to take Amnesty’s word for it? Okay.

Last week, Amnesty International finally published its full policy position on sex work. The reaction from anti-sex work feminists has been predictable: lots of vitriol, penis-shaped candles, and pimp smears, but little to no engagement with Amnesty’s actual arguments. The 101-page report into Amnesty’s research in Norway (Melissa Gira Grant has summarised it well here) has been, unsurprisingly, almost totally ignored, apart from a couple suggestions that Amnesty is too compromised for its research to be trusted anyway.

Well, great news, “Nordic model” advocates: you don’t have to take Amnesty’s word. Because Swedish super cop Simon Haggstrom – you’ll know him from his frequent visits to other countries to proselytise for the sex purchase ban – has now published his memoirs. Only in Swedish, alas, but that’s why God made Google Translate. Here are some of his views on how the law actually functions in practice. Let’s take them thematically, shall we?

On whether the law is “working” to end demand

On the law’s “normative effect” on young Swedish men

On whether sex workers are still hassled by police

Note the subtle threat in the above, made explicit in the next one:

On whether sex workers are de facto criminalised

Pro tip: ask anyone with a precarious immigration status in your country whether that sounds like a request to voluntarily assist with a police investigation. Or not.

Confiscating their used tampons and displaying them as “evidence”? You decide. 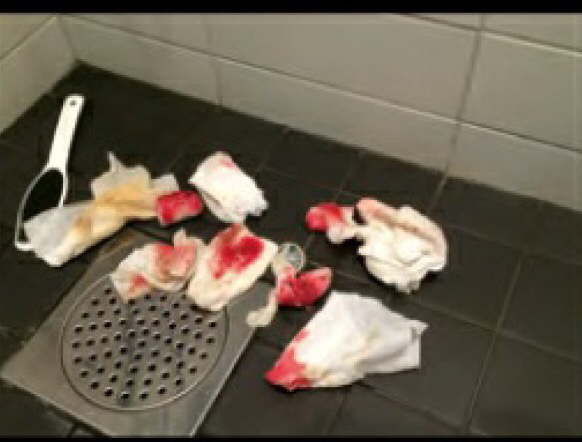 Yes, this is an actual picture in the book 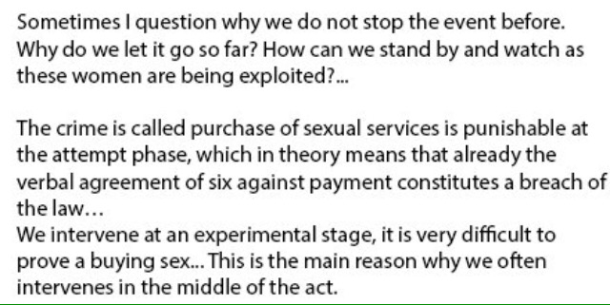 In fact, one could be forgiven for thinking the “main reason” is something totally different. If the cops intervened before any sex took place, Simon would miss all the good parts:

On who exactly benefits from this law

Well, there you go: it provides the cops with “excitement” and plenty of wank material, in which they themselves play a starring role in the action. Ironic, when you consider that Amnesty are the ones being accused of privileging men’s sexual desires.

So let’s recap. According to one of the law’s chief enforcers, it hasn’t changed men’s attitudes. It isn’t deterring them from paying for sex. It isn’t stopping women from selling sex (indeed, they have to engage in a sexual act before enforcement will take place at all). It is subjecting them to unwanted interactions with the police, up to and including detention, and deportation for those who refuse to accept the cops’ “help”. That … sounds an awful lot like what Amnesty found next door in Norway, doesn’t it?

Credit to Lucy Smyth for translations and screenshots.