Why can’t a woman get a life-saving abortion in Ireland?

Ireland has produced many brave and influential women whose lives have helped change Irish society, but it’s a tragic irony that one of those who’s had the biggest impact – and sparked the longest-running controversy – is someone whose name we don’t know, who was only 14 when she came to our (and the world’s) attention and who you can bet would have given anything to have never been heard from in the first place.

She’s known as Miss X, and 20 years ago she was raped and impregnated by a much older family “friend”. Ireland is still governed by 1861 (!) legislation which makes abortion a crime punishable by life imprisonment, so her parents took her to England. When they contacted Irish police to ask if the embryonic remains might be useful as evidence, the police contacted the Attorney General, who promptly sought an injunction to compel her to return to Ireland and remain for the next nine months.

This astonishingly cruel and repressive act was “justified”, according to the Attorney General, by Article 40.3.3 of the Constitution. Passed by referendum in 1983, the Article reads:

Miss X, however, was threatening suicide if she was forced to bear her rapist’s child and so her lawyers argued that her own right to life – also protected by Article 40.3.3 – was engaged. In the High Court, Justice Declan Costello (who was eulogised on his death last year for his commitment to social justice) applied a crude balancing test to reach his decision: if Miss X was forced to continue the pregnancy, she might die, but if she was allowed an abortion the foetus would die. He thus granted the injunction barring her from travel. 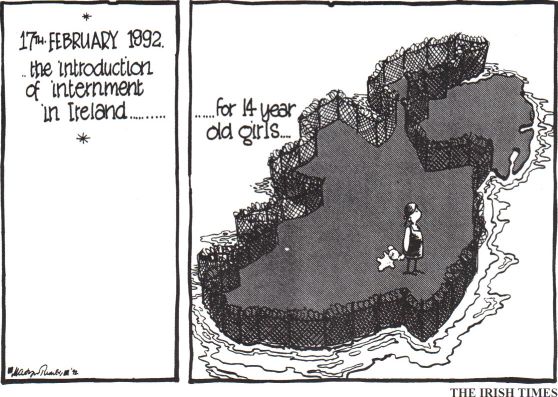 On appeal, the Supreme Court took a different approach: a majority deemed abortion permissible under Article 40.3.3 where it is established, as a matter of probability, that there is a real and substantial risk (not necessarily an immediate or inevitable one) to the woman’s life. The risk of suicide, it held, fell within these exceptional grounds.

The government responded to the decision – and the controversy engulfing Irish society – by putting three more referenda to the people (the Irish Constitution can only be changed by referendum). One would have overturned the X decision to the extent that it deemed suicide a risk entitling a woman to an abortion. The second would clarify that Article 40.3.3 did not impinge on the freedom to travel outside the state – a necessity since a majority of the Supreme Court had also felt that the rights of the “unborn” would supersede the right to travel where there was no risk to the pregnant woman’s life. The third aimed at resolving another ongoing controversy, allowing information to be made available about legal abortion services outside the State.

The Irish people voted sensibly, around two-thirds defeating the first referendum and slightly smaller majorities passing the other two. This still left the State with one of the most restrictive abortion laws in Europe, however – and the cowardice of successive governments, in refusing to legislate for the decision, means that 20 years on we still don’t know exactly what it means in real terms. How is it to be determined whether a pregnancy poses a real and substantial risk to life? Who gets to decide? And what remedies are available to a woman denied an abortion despite believing she falls within the criteria set out in X?

There are no answers to these questions – and the consequences for some women are dire. In 2010, a woman named Michelle Harte from County Wexford, a cancer patient, was advised by her doctors at Cork University Hospital that she should have an abortion because of the threat posed by her pregnancy. However, the hospital ethics committee – which apparently did not read the X judgment very carefully – overruled this advice, deeming the risk to her life insufficiently “immediate”. The identity of those on this “ethics committee” is unclear, but it is stated to include a number of non-medical people, including some with “theology and philosophy backgrounds”. What kind of bullshit policy allows theologians to overrule doctors’ decisions about the medical risk to someone’s life?

Another woman harmed by the lack of legislation in this area is known to us as “C”. She was one of three plaintiffs who challenged Ireland’s abortion laws before the European Court of Human Rights, which found in her favour (although not in the other two’s) in December 2010. In a ruling that was entirely predictable after the 2007 Tysiac v Poland case, the ECHR held that Ms C’s Article 8 (private and family life) rights had been breached by the State’s failure to make abortion actually available in the extremely limited circumstances where it is legal. (Ms C, like Michelle Harte, was a cancer patient; she testified that she could not even get medical advice on the risks posed by her pregnancy, such was the chilling effect of the anti-abortion criminal law.)

The State is obliged to abide by the rulings of the ECHR (although there is little in the way of enforcement mechanisms) and so, as a practical matter, it has one of two options. It can either amend the Constitution to remove the “due regard to the equal right to the life of the mother” clause – thereby making abortion illegal even to save a woman’s life – or it can set out a clear and transparent mechanism, with a proper appeals procedure, for women who believe they meet the X criteria.

To readers outside Ireland, the fact that this even poses a dilemma for the government must seem indescribably bizarre – something you might expect to find in the Taliban’s Afghanistan or Khomeini’s Iran, but not in an ostensibly modern, advanced OCSE country in northwestern Europe. And in fact, it’s pretty bizarre to us too. A referendum to remove the right to a life-saving abortion hasn’t a hope of getting past an Irish public that believes by almost nine-to-one that such abortions should be legal. It’s notable that in the two referenda that have attempted to roll back the X decision – the one immediately following the judgment in 1992, and a second one a decade later – it was only the eligibility of potential suicides that was at issue; the possibility of taking the right away from women facing other risks to their lives, women like Michelle Harte and Ms C, wasn’t even contemplated. Why on earth would it be contemplated now?

And so, as Choice Ireland noted several months before that predictable ECHR decision, the Irish anti-abortion movement have taken a different tack: they’re now picking a fight with the English language. In regular ludicrous press releases and columns like this one, they’re trying to convince a (not-buying-it) public that there is no need to protect the right to a life-saving abortion, because there is no such thing as a life-saving abortion, because – wait for it – it isn’t really an “abortion” if the purpose is to save the woman’s life. It’s a “necessary medical procedure”, or something to this effect. Which just happens to end in the death of the foetus or embryo. Got that?

Now you know, and I know, and anyone who’s ever opened a dictionary knows, that that’s a load of rubbish and there’s not a chance of the law being changed to reflect it. But what the hardcore anti-abortion movement lacks in logic and public support, they more than make up for in political power. Quite simply, the major political parties in this country are scared shitless of them – and I mean all the major political parties, not just the two right-wing ones (Fianna Fáil and Fine Gael) that have consistently pledged not to legislate for the X case. The two next-largest parties, Labour and Sinn Féin, both support the right to abortion in life-saving and a couple other scenarios, but neither trusts a woman to make up her own mind about the decision. In fact, prior to the last election (which returned five members of the United Left Alliance), there was not a single pro-choice party in the Irish parliament. And even the ULA declined to campaign on the issue during the election, although to their credit they’re starting to make up for that now.

A consequence of this hold that the foetalists have over politicians is that more than a year after the ECHR decision (and, of course, twenty after the X case) we’re still waiting for implementation. And we’ll be waiting a while more. The government “met” its obligation to tell the ECHR how it was going to implement the decision by stating that it would establish an “expert group” to consider how to implement it. Just telling that to the ECHR took six months. It took another seven to announce who was being appointed to the group and the group’s terms of reference. The group’s conclusions are to be reported back to the government in a further six months. What happens then is anyone’s guess.

There are a lot of aspects of this story that I find sickening, but perhaps none more so than this: we in Ireland are in the midst of several years of austerity budgets, which this and the last government have justified by saying they need to make “hard decisions”. So they have made the hard decision to cut income supports for working and unemployed people, lone parents and those in need of extra assistance to care for the children they have. They have the made the hard decision to impose new stealth taxes and increase VAT, all of which will have a disproportionate negative impact on those already struggling to cope. They have made the hard decision to cut funding for community and support services for low-income women and families, and to combine the Equality Authority and Human Rights Commission into a single (and even weaker) body at precisely the time when discrimination against pregnant women and new mothers is increasing. So, the Irish government has no problem making the hard decisions that hurt women and families, and the hard decisions that make it more likely that some pregnant women will seek abortions. But legislating to ensure that a woman who might die without an abortion can get one in Ireland?

It seems that’s a hard decision too far.

Please go here for information on the Action On X campaign, or email actiononx at gmail dot com